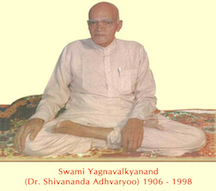 Bapuji was born on 18th December 1906, in Anida village of Gondal (Gujarat), to Mother Parvati and Fater Gaurishanker and was named Bhanushanker. His earlier education was in Bandra Village and then to Gondal and finally passed L.C.P.S. Medical course from Ahmedabad in 1930. He was married to Jayaben on 25th February 1929. He did M.B.B.S. in 1940 and D.O. in 1942 to become an eye surgeon. In earlier age he was impressed by Mahatma Gandhi, Muni Shri Santbalji and Swami Ramdas. In 1950 he saw Swami Shivanandaji but he could meet Gurudev in 1952. By inspiration of Gurudev he soon started Divya Jivan Sangh and started publication of "Divya-Jivan" in Gujarati in 1956.

He met with Seth Virchand Panchand Shah in Virnagar who was a well known gandhian and wanted upliftment of the rural India so. Dr. Adhvaryoo took premature retirement from government service from Patan and came Virnagar in 1956 and took charge of the dispensary started by Shri Virchandbahi Shah viz Saurashtra Central Hospital at Virnagar. Netra Raksha Charitable Trust was formed in 1969 with the help of Ruth Joshi a Swiss lady from Zofingen (Switzerland) and SWISS-AID. Discipline, hard working and benevolence enabled him to perform lacs of eye operations. He translated many books of Swami Shivanandaji in Gujarati and Published.

In 1981, Shivananda Mission was formed to widen activities from health to other spheres of life such as Education, Agriculture, Water Supply, helps in Calamities and publication of spiritual scriptures. On 18th November 1986, he took sanyas diksha from Swami Chidinandaji who gave him the name Swami Yaganvalkyananda. Rev. Bapuji also established a new organization "Shivananda Parivar" in 1993, with the objects youngsters, spiritual work and publication as well as educational activities.

At the enviable age of 92, on 22nd October, 1998 he breathed his last on bank of Sacred Ganga, in the holy atmosphere of the Shivananda Ashram. He has a premonition of his departure from our midst where he told his staff at Virnagar while leaving for Rishikesh that when they all return from Rishikesh one person will be less.

He was well known throughout Gujarat for his great compassion and selfless services in the minds of all those who have known him for many years to come. His blessings for Virnagar will be forever.