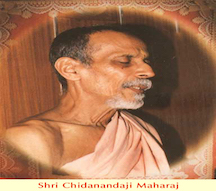 On 24th September, 1916, Shri Sriniwas Rao and Srimati Sarojini Devi were blessed with a child who was named as Shridhar Rao, who in future became SWAMI CHINANDAJI MAHARAJ, the Gurudev of millions of disciples of Divine life society.

Earlier education of Swamiji was from Mnagalore. In 1938 he completed B.A. but he had strong inclination towards spiritual life so he dedicated his life in the service of downtrodden and leprosy patients meanwhile studying deep and finer aspects of religion. In 1943 he went to Rishikesh in the sacred feet to SWAMI SHIVANANDJI and within short time he became his most beloved disciple and on 10th July 1949 became SWAMI CHINANDA from shridhar Roa after renunciation and sanyas diksha from Rev. Gurudev.

Swami visited U.S.A. in 1959 as messenger of Gurudev and had to become the President of D.L.S. after sad departure og Gurudev in 1963, then visited again many Countries in 1968 to spread message of divine life. On many occasions he had visited Virnagar (Rajkot) as he had immense love and respect for the "Doctor Saheb" (Dr. Shivananda Adhvaryoo, Bapuji), who was his Gurubhai too. He attained Maha Samadhi on 28th August, 2008.