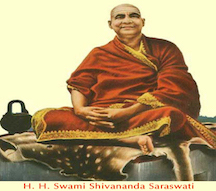 A divine soul was born to Mother Parvati and Father Vengu Iyyer on 8th September 1887, in a small village called Pattammadai, in southern part of India, he was named Kuppuswamy; later who became SWAMI SHIVANANDAJI.

Kuppuswamy was brilliant in both study and sports; he became Doctor and went to Malaya as a Medical Officer in 1913. He was very popular among laborer due to his sympathetic approach. He came back to India in 1922 in the search of the ultimate truth.

He reached Rishikesh in 1924 and got renounced and sanyas diksha by Swami Vishvananda Saraswati and thus became Swami Shivananda Saraswati from Kuppuswamy: later on th established Shivananda Ashram in 1932 at the bank of river Ganges for the penance, self realization and preaching; and to serve pilgrims and saints.

He founded the "Divine Life Society" in 1936 and "Yoga Vendanta Forest Academy" in 1948 for the studies of voga and vedanta. He also organized World Parliament of Religious in 1953. He attained Mahasamadhi on 14th July 1963. He wrote over 300 books on religion and spiritualism. Serve, Love, Give, Meditate, Purify and Realize were his teachings.